The spirit of the thing

Moral: Wherein we consider that Adam's (and others') use of spirit ("animal" and otherwise) needs a new look, perhaps. And, is Lance a better poster boy than, say, Jamie?

Of late, Armstrong is in the news, what with his little chat with Oprah before the cameras. There is no need for any link here, as everyone knows the story.

So, based upon one's reaction to that bit of tell-it-like-it is, one might predict the response to the revelation that follows about business, perhaps. Here are the questions for you, the reader.

Okay, how did you answer? Well, it turns out that your notions apply to your thoughts of business, too. For instance, did you know that everyday there are people doing business work for which they are not proud (as in, they're cloaked behind all sorts of rationalizations and legalese)?

Oh, that's the way of the world?

Earlier, we mentioned hedge funds as being problematic. Actually, we suggested that they are to the rich what ponzis (Herbalife aside) are to the poor (yet, Made-off targeted the rich - made them feel to be in some exclusive set, or such as that). Perhaps, hedge funds are for the more smart of the crowd.

So, Businessweek quotes some player saying that all in this type of business have to go over the edge (not talking morality, as they are not even close to have any moral bones in their embodied thing). And yes, I know the connotation of "edge" being used the quote, basically an advantage (that's why some sports have weight classes, etc.). Consider, any edge, in the more general sense, has a couple of sides (at least), not unlike the proverbial wall. Which side one falls on tells a lot about the person.

We know this type of thing is the usual mode? So, why are those who fill their pockets this way given so much applause? Envy? Ah, thank you, we tell them. It feels so good to have our collective pockets picked by your Excellencies! Who wants to have that type of tainted money?

As well, we saw problems with the systems that run markets. This goes on daily, to boot. Well, in the U.S., five days a week. And, underlying their machinations is very suspect theory. Ah, the way of the world, again.

The fact is that we could clean up the whole thing, if we had the heart. One basic argument is that everyone is doing it (as in, no place in the world is clean, after all, we're nowhere near anything like utopia).

Anyway, the world is more about power than truth, for now (as in, until when?).

Are those who do the "bad" deeds just stupid? You know, there is an adage about rising above one's level of competence. Do some of these folks just have a higher platform from which to launch themselves into errant ways? That is, they're already to 3rd base or home before they even start.

But, no, newbies abound in the class of steppers-over-the-line, to boot. Actually, there is a lot of lip-service, by some, in regard to ethics (the 1636 school, trust (these guys/gals), and more. But does technology imply out of control? That is, the American dream is a farce, except for the very few (as in, those who can pirate and get away with it)? 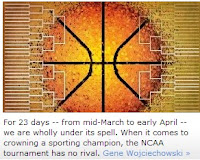 03/22/2013 -- GW at ESPN (see image on right) has a nice point of view on the madness (and related comments). We ought to have something similar for the financial folks, using play money, with prizes. That's the sandbox, folks. Then, the real stuff would be handled by mature, stable adults (not the greed ridden - and similar ilks -- okay?). The madness has to do with animal spirits just like the market (ala Adam). Too bad that one loss gets one out the door. Perhaps, at the final four level, there ought to be a round robin, like college baseball. --- Now, having just written the above, this glorious bit of madness is really a sham (see comment at madness, 03/12/2012, below). The whole madness pits kids against each other, who are playing for naught (comparatively), being coached by millionaires, with big buck media behind the affair, and a bunch of other lucrative ploys benefiting from the labors of the few. If one looked at qualities (as in, abstract out a truthful look at this), one could find parallels (many, many) all across history (these things being not consider our best behavior). Granted some (as in, not all) of the kids go on to big bucks. Others find glory in their endeavors (what would be be without school spirit?). Yet, besides the commonality with historic events that aren't looked at as being our (humankind's) best moments, there are all sorts of analogs in business (which we've seen of late, in glorious detail, as being problematic at its core - the heart that is supposed to be related to finance). By the way, see the comment (madness, 02/08/2013); that particular team ended up with a #1 seed.