Wake up, people, it's your right

Moral: While Janet is dancing in front of Congress and the world today (will she ever wake up to the plight of the savers?), let's look at something that really needs attention. Also, Janet, please. You and Ben have stoked the Cheshire multiple to the maximum (building, while doing so, a massive teat for the addicts who cannot grow up to a real economic status ... need we go on?).

So, what needs attention? The entrapment of we the people by the supposed smart. In particular, we'll focus on those with the computational wherewithal to effect such as there are whole sorts of variety of these enmeshing situations.

The Magna Charta will be celebrated next year, 800 years after the fact. The world and its people needs such for web/cloud (or however it can characterized) in order to keep the Lords (with huge pockets) in check.

But, people will have to wake up their minds and see that under the kimono (skirt, okay) of these technical giants is not much but crap of an exceedingly smelly nature. Why? Because they could do so (as in, have the users clean their diapers) without any oversight or concerted reaction by the users (many of who are running after silly apps as if those were the essential order of the world).

Now, the WSJ even had some code on its front page (of the later sections - here's an example). Can you believe it? I remember when the bosses kept themselves remote from anything having to do with computers. If they did have a terminal, it was hidden in their desk.

Then, people, Blackberry happened. The result? Those idiots, some world class, could not get themselves away from the idiot thing as if business required that (their addiction - talk to the families of these jerks - who have now morphed several which ways).

Later, the "pads" came to fore of varying size. That pushed the ensnaring web's influence out even further. In fact, some seem to have a worldview based upon these as the primary interface with reality. Or, to put it another way, truth is bound thusly.

So, big issues? Yes, one thing is that this is easier than people realize. We can talk an adage: know one, know them all. You see, one important step is to start to think in these terms which can be difficult, for many reasons.

First, there is the fact of abstraction. But, hey, if you could do high school algebra, then you can code. What if you are less oriented toward that? Well, part of enhancing the computational experience for us all would be creative use of technology. We have seen how content is of importance, albeit with a stable basis provided by the technological platforms underneath. It is this latter that has willy-nilly emerged with no seeming interest by users in any type of consistent experience. Ah, the changes that we have seen.

Second, things are cloaked, either by proprietary issues or by subterfuge. Not only do we need to see what is behind the kimonos, we need to lift things to the light of day. But, that concern of mine needs a little more elucidation. We'll get there under the guise of truth engineering.

Earlier, I ran across Codecademy, again. The first encounter was of the type of, hey that's nice. The second one was more involved and reminded me of the power felt back in the 80s, when complicated computing was advancing at an accelerated rate. What happened after that was the emergence of the cloud as perturbed by greedy folks bent upon big pockets and fame.

Nowhere have I seen any type of user focus (correct me if I'm wrong). Mind you, I'm not talking Congressional oversight, as those who ascend do not understand these things. On the other hand, do I know how these things out to play out? Not really. I'm only raising issues, laying down, so to speak, makers in abstract'd spaces that are supposed to point out areas of concern and potential focus points. 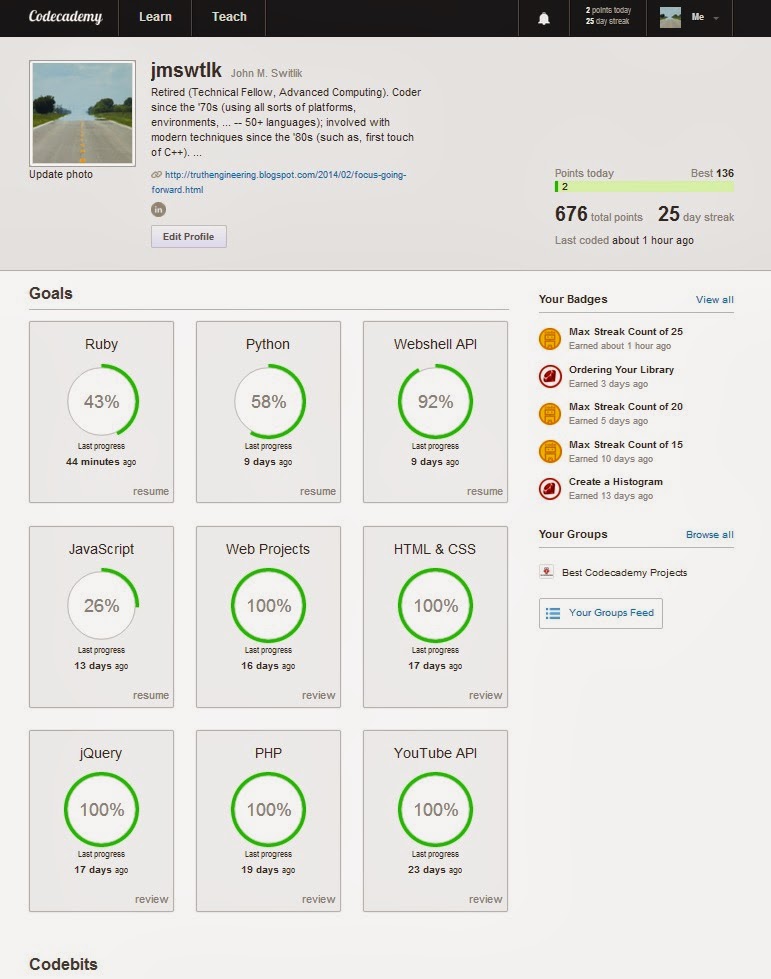 One thing would be to have a populace that knows code. Too, kudos cannot be exclaimed enough for the freebie folks. You know who they are, the Open Source, etc. Not so much for the advertisers who are entrappers by nature, though they do have some use (yes, my profile does not subsume by being, not even by a fraction - rather, it's an irritant - ah, hence the pearl?).

The image is my profile at Codecademy. I've done 25 straight days (which they call a "streak" - well, I have done literally 40 years) of coding of various types. Too, I have looked at a lot of lessons, found problems, learned to like the interface, and more. As well, I had one day of 136 points. It was interest that kept me going as I had spent several years consciously ignoring code (after decades and after accepting the notion that code is the basis of reality -- not so, folks, we have to talk being and to look at what we are). Essentially, I cannot praise Codecademy enough for their presentation (and interpreter).

One thing that this might show is that an old guy (72nd year with more in computing software than not - I did dabble in the electrical engineering department - but, code is more forgiving - after all sorts of developments that allowed conjectures - compile/test - okay? -- in my early years, you had to desk check - play computer, due to limits - resources, compiler technology, etc.) can do this stuff. We need to get the kids involved. But, at the same time, let's talk quality, control, and some things that seem to be without the scope (Zuck's stuff and more). That is a short list; one thing is that I was able to get several projects to SEI/CMMI Level 5 status, even those dealing with advanced subjects.

But, as the agile guys say (hey, I was there in the 80s, guys, so let me speak up about things, if you would), oppression diminished creativity. True. But, willy-nilly (oh, did I use that earlier?) makes for an untamed jungle (open for hacker, and other, types of malfeasance'd thinking).

Another thing is that I want to be technical. Note, please, I've used 50+ languages, in all sorts of environments that were critical, of certain types. So what? All along, I brought along older types. In fact, one older engineer did a conversion of a (nontrivial) system to a new language after only a few days of my tutoring.

All of the arguments of bringing in people since Americans cannot do the work is pure bunk (all of you technology companies are to blame - hell, I wrote up those justifications myself - mea culpa, mea culpa).

Too, we need the younger set to get into these things. For one, it'll straighten up their thinking. In this sense: the computer is purely logical, numeric and does not kowtow, play favorites, -- meaning, it's tediously corrective - like an idiot savant). But, older people need to as well.

Adage: From my decades of experience, I have seen the older crowd let the younger folk work the detail either through laziness, pride (ah, such arses, let us twiddle their brain with mathematics and see their real abilities), status (as if, the highers don't care - yes, arses, again - oh, DC and all of its ills is a prime example), or whatever reason (say, greed, as with the quants - yes guys - you and your algorithmic Smithíans - sheesh, Adam is rolling and rolling in his grave). Yes, it was a major capitulation with far reaching consequences.

So what? Well, these things deal with our future and the essential sustaining of an economy.

The WSJ articles itemize some of the ways that people can make money with code. That's nice. There are ways that we can have all sorts of remunerations from such work.

However. another adage: FOR ALL SYSTEMS (APPS) HAVING RAMIFICATION, OUR NEED IS TO HAVE CONTINUAL OVERVIEW (to be expressed) THAT WILL BE MULTIPLES IN COST WHEN COMPARED TO THE ORIGINAL EFFORTS (agile folks, listen up).

Off shoring of knowledge? Crap back? What do you expect? The out-housed topic will be brought back to fore (opinion, yes, but not unfounded).


03/19/2014 -- As an aside, up until about four years ago, I always had development environments available which were problematic, for several reasons, but here's two of them. And, this applies whether they were bought or free. Either they were not interpretative and were not the easy mode that we had with the Lisp Machine. Or, even if they were, they were heavy (Visual Basic and python come to mind) and took effort to keep up (gosh, early Java was a nightmare, at times). Now, here comes Codecademy with their little interpretative thing. Okay, given, it is oriented toward courses, but it allows us to see the possibility. How many of these types of environments are there (not meaning language specific, rather the access to code handling)?

05/13/2104 - Using a website context to research and discuss issues related to this theme.

09/06/2015 -- Quora and knowledge? In this case, someone was comparing now to the times of Northumberland before the Vikings came in and ruined the situation for all but themselves. Well, actually, for all. The culture finally settle down. ... Another modern way.