Moral: Wherein we look at how Ben has stiffed the savers (see Ben's largess, I).

A couple of years ago, we were just beginning to hear Ben say that there would be no limit. Some got to calling the program, QE Infinity. It would be funny, if it were not so sad.

Ben was before his supervisors recently. He said that his largess helped the world's economy. Oh? Does he know that he's breaking the patriotic backbone. Yes, I've said that he's slapping the savers silly, but there many ways that he is doing this that need to be brought ought.

Why is there not outrage for what follows? It's a table of values related to Savings Bonds bought in 1997. Why that year? Well, we could go into that, but let's just look at the numbers. In this case, let's say that there were twenty-four bonds bought over the year. At the end of the year, $1,800 was spent to buy the bonds.

Now, think of the purchase as being related to a bond sale that had a patriotic flavor. These used to be common occurrences. The intent was to get money set aside to help the government. For this money, there would be interest paid. The bonds would go on for thirty years and pay out something at that time.

You see, the bonds, too, were said to be good for grandparents to give to their grand kids. Foster patriotism. Too, help our good old Uncle Sam. A lot could be discussed here, but let's just look at the numbers.

Then, Ben's long-term coddling of those who were responsible for the problems began to sink in. Notice, two things, please. The incremental value (Yrl Chng) diminished from 2008 to 2013. Then, there was a negative impact on the maturity value. That, folks, is one of the many ways that Ben is eating into the pockets of those who can least afford it.

Ah, so much that we could say, but won't for now.

In a discussion, some wise guy said: well, those people could adjust their portfolio. Again, I will hold the tongue. As Adam Ferguson, what reasonable person would subject themselves to the vicissitudes of the gaming table that is the market. He, by the way, was a contemporary of Adam Smith. Will get back to these two. 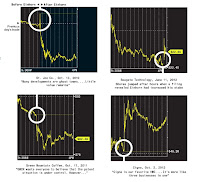 Yes, Ben wants us to put our money in the game. Where it can be lost by someone talking. Please see the article on Einhorn at Bloomberg's Businessweek. Chimera, indeed.

The image is from the article and show stock dropping or rising about the time of Einhorn's comments about the company or things related to their operations or any number of other things.

For me, it's patently ridiculous to say that this is how our monies ought to be handled let alone think that such is capitalism at its best.

There is a lot to talk about here. We'll be back at it, from time to time.

09/18/2013-- Pop, fizz, ... Ben had to show largess because of idiots who ran the economy to the ground (rogues all around). Ben is going. What do we have to look forward to? Businessweek has a review issue (of the past five years). Several articles are especially interesting. Too, phrasing shines: spin dross into gold (in relation to mortgage bonds). Perhaps, we'll get back to some of the more pertinent ones, at some point. If we do, it would be to bring forward what has been said here, from the beginning. To wit? Tranche and trash (WSJ has a good take on that). Securitization? This article brings on weeping (one example of the misuse of mathematics and computing that has been harped about). Adoption, and improved understanding, of lazy evaluation let loose the powers that resulted in the wild web and its little children, namely social media and more. To grasp the problem, we have to go back to computing that is in some type of responsible area. Avionics comes to mind. If what is couched as software in looser domains (financial engineering? -- looser?, yes bailouts are the norm despite all of the protestations of the ruling elite; or the whole cadre of the poorer folk can just suck it up when there are problems in order to relieve the fat cats' loss) were to used in flight controls, would we not have planes falling out of the sky? We'll get back to the simple issues that seem to not be seen by the elites chasing after the bucks that Ben has been throwing out of his helicopter.

06/22/2013 -- So, how many traded their paper gain (chimera) to solid debt with the downturn? Okay, forget the size of the loser set, how much went from illusory gain (backed by a promise to pay later) to real debt that has to be paid with blood and guts? Wait! Some of those doing the margin calls, and ilk, have some way to weasel (not disparaging the grand animal) out, not doubt.

06/05/2013 -- Singularities (understanding how and why these arise, how to manage) will be of extreme importance. Hint: related to computability but concerned more with what might be termed "vertigo" (subtle, yet not).

05/22/2013 -- Need to look at the cosmology of business (Remarks this day). --- Also, see Remarks on 04/01/2013 which point to someone talking about central planning. Let's recall, please, that the brains of the west (many of them) scoffed at the efforts of the commies (of several ilk, such as the USSR). Ah, we don't do that in capitalistic societies, they would say disdainfully (ah, everything is driven by the invisible hand of the markets). The truth of the matter is that, yes, there is such a function done in modern economies. Ben's ability to do what he does is proof enough (and, he's a regular attendee at meetings under the auspices of the leaders of the free world). ... But, then, the proper lens would note the need for this type of function, to an extent. So the question would be: has Ben's little take on the matter led us to dire straits and perdition, in the future? Ah, we will see. And, we will be prepared to do the analysis that is necessary.

03/30/2013 -- The whole thing makes a mockery of U.S. Savings Bonds. It's just one of those little side-effects that Ben must think of as minor. Perhaps it is to him and those high-falutin'. If he looked at it closely, he would see that one avenue for building a small nest egg has been trashed. Thanks, Ben. You want everyone to reach for the glory of riches by the chimera. Tsk, tsk!