Dark pools and other things

Moral: Wherein we look at a few recent articles and at what these might mean.

The WSJ always has interesting news. When there are some that relate, we need to pay attention.

Note: As said earlier, this opinion comes from a normatively-oriented view. 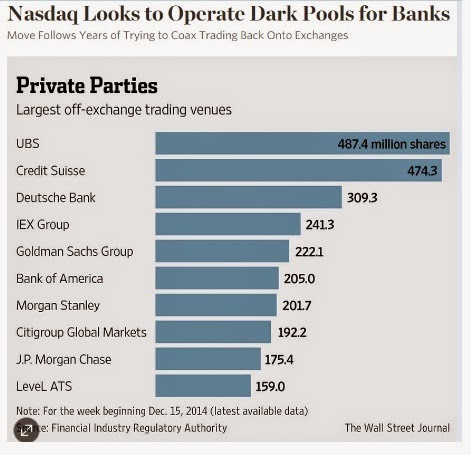 Of course, the WSJ has to fill its columns. Too, the Street needs it playground, albeit a sandbox sounds very good now and then. That last column does bring in another focus that needs its day.

BTW, arbitrage (misuse of, especially given the "smarts" of computing) is one culprit (remember the Nobel winner needing to be bailed out by the Fed and us - sheesh); as in, too many creating these moments (of liquidity need) just to allow their thrashing? How did this come to be?


01/14/2015 -- See what Investopedia says about dark pools which are used to cloak. In other words, large block sales can happen without depressing prices. So? Someone down the road eats it. The "pedia" does have a pro/con section, however this "pedia"writeup is from the viewpoint of these types of markets. The blogger sees this as silly gaming and not of necessity. Of course, it's his duty to show why these approaches are bogus (at their core).

01/15/2015 -- At last, a series that will establish the basis and extensions, as required. We are going to go back to some simple and come forward to the modern, complicated economy. Why? My long chain of ancestors (inherited via Prof. Lucio Arteaga) is one motivation.

01/23/2015 -- So much fun. Now, bankers are wanting their own dark pool in order to separate themselves from the front runners (who? yes, HFT, what else?). Our next post on this will show how such dealings (block trades) pull value from the other holders of equity (or whatever else might be the focus of a market). In other words, we see, with this, the proverbial skimming the cream (leaving, over time, less fat for the rest) or the butchers thumb on the scale (I showed that type of thing to the FEDS and was told to, as an individual and an old guy who sees, sue the perpetrators). --- Lack of consideration for the normative is one concern.

02/18/2015 -- One way to explain the motivation is ensuring liquidity (thereby, adding to the illusion, thanks, El-Erian).