Moral: Wherein we weigh in with a reminder that the story of Main Street's lingering effects from having to change the diapers of the gamesters (yes, the ilk of Wall, etc.) still needs to be told. 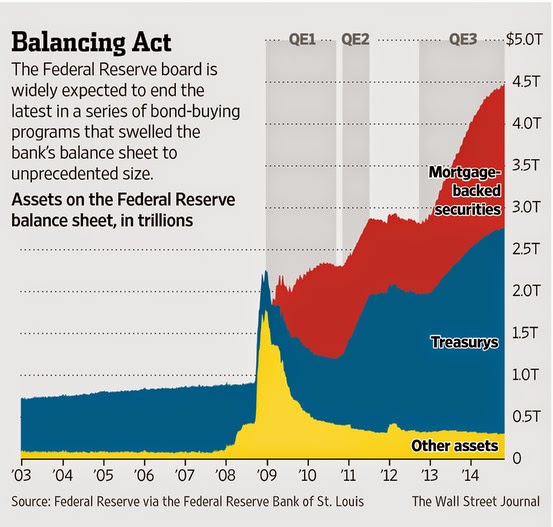 So, one chapter closed with the meeting of the Fed. According to the WSJ headline: benefit of bond-buying experiment remains unclear as central bank's focus returns to interest rates.

The graphic of the Fed's balancing act is a nice touch as it splits out their holdings by type. Note the amount of mortgage-backed securities. Some of these were from the toxic era. What would closer analysis show? All sorts of economic positions are being argued now.

One fact is clear. Yellen is focal and expected to remain as such. After that, all things are fuzzy. But, let me make two comments here that are very much apropos.

Stopping now. The tales, to be told, are not, as of yet, touched any more than barely. How many more points to cover? Well, consider this. The view? Economics trained, econometrics focused, computer modeled facilitated, essentially scientifically predisposed, intuitively oriented (as necessary), and more. ... The whole caboodle needs a look (is time infinite?).