Playing for what? Insight?

Moral: Wherein we consider this: why does the banker (read, the new type as market player - where is there a real banker?) have so much power (besides having a pot load of money to buy power -- remember Jamie's recent little chat with friends?)? 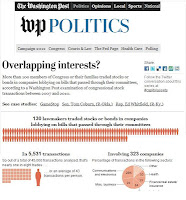 I feel like old Rip again, except this time it was more disbelief (which can be outlined, in time). The Washington Post had an article on members of Congress using information that comes their way, evidently because of their position, to play the market (characterization based upon this point of view). As we know, the chimera of the ca-pital-sino has a very strong appeal, to many.

Not to all, and that is the message to expand here. But, Congress has given itself this right to play for a long time.

The dissonance comes from having worked for the government and for ethical companies. To see certain types (albeit stars in their own minds -- and in some others) keep their options (pun intended) open without regard to how it may be ethically is disconcerting, to say the least. As the one review says, Congress has seen to it that the Executive branch employees have had their scrutiny. Why not itself?

Well, in this case, there is justification due to ca-pital-sino's appeal. As we know, capitalism has descended to gaming, essentially.

The esteemed members of the Legislative branch can then claim that they will learn (about the lives of their constituents?) from playing the market. That might be partly true, after all the gamers are part of their citizen set. But, it sure looks like the classic example of pigs (ruling set, as one comment suggested) at a trough.

Of course, it's not the whole bunch, as the numbers seem to be less than a third. Since this group, for the most part, is open to public scrutiny, it's time for questions to be asked. Thanks to the WP for looking into the matter.

According to the comments, the article struck a chord with many. OWS ought to pay attention.

06/26/2012 -- We have citizens risking life and limb for the freedom of the few to game the system? A lot of the awry (obvious everywhere) can be directly attributed abuse of knowledge (power) and misuse of our mathematical advancements (actually, pushing them beyond their basis) in order to gain rewards for the few (meanwhile, spreading the loss to the most). The concept: near zero (any accumulation to one large pocket pulls from many more smaller ones).