Moral: Wherein we let Jamie be for a bit and re-look at Facebook.

In another context, we started to consider Facebook's potential for showing us the future. Well, the context changed of late. Notwithstanding all of the hype and criticism, there are realities to consider. It looks as if FB might be a better poster boy (yes, Zuck) than is that old thing run by Jamie (but, maybe not, if we keep seeing things like this blog post -- 31 billion?). 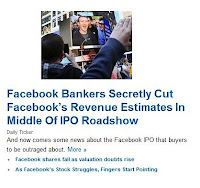 All along, we've pointed to articles in posts. Many of these, as we all know by now, can become stale, disappear, or turn out to be bogus and much more. So, we'll take a different tack from now on. The image shows headlines, today, on the Yahoo Finance page. Notice that it talks about other-than-clear activities. Yes, FB might want our information; how much is there that we ought to see beneath its opaque 'face' (pun intended to mean that we are all  much more than our faces -- FB's basic shortcoming)?

Well, given the IPO, we'll have to watch how these things unfold. The young guy ought not to have followed that ca-pital-sino route. Oh well.

One cartoon this weekend shows Zuck and his father gleefully filling a large bag of money. Didn't read the caption. Just thought about how so many (and, folks, these people have been arguing this idiocy for a couple of centuries now) see capitalism (and this type of thing as its greatest form) as the epitome. Of course, who says such nonsense (yes, Wall Street -- what you and your ilk propound) is 'capitalism' as it ought to be for a sustainable economy?

With FB as a focal point, we'll have a whole bunch of things to talk about.

These thoughts are offered within a framework of looking at how we can sustain ourselves while at the same time leaving a manageable world for our offspring, more than one generation out (okay?).

10/13/2012 -- The FB experience is some analog of spectral (of the spectrum) experience that is beyond the visible. FB (and the delivering technology) handle the non-visible element. Or, do they?

08/04/2012 -- So, the market pushers say that they need things like program trading, and whole bunch of other stuff that we'll get to. So, the idea is that we need computer-based 'gaming' in order to discover 'price' and to provide liquidity. Liquidity? Yes, like that put into the pockets of Zuck (see 7 points on FB) and his ilk after the IPO. You see, those who made money bailed when the price was high. It is estimated that if they sold now, the take would be 1/2. Notice that I didn't say return (for what? -- 'gains' obtained this way are near-zero). Whose to cheer that a few make some massive amount of bucks (well, beyond those personally involved -- even the bankers who put deals together)? This type of thing is capitalism? If so, do we really need this, folks?