Moral: Wherein we continue a re-look at themes related to labor (persons), corporations (the wannabe person), lord-serfs, and much more in the context of the development since Sept, 2011. 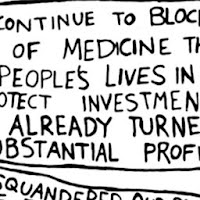 Which development? OWS, of course. Their grievance list (image from that page).

Rank and file? Yes, denotes another type of split: leaders (and egos) and the rest. Other concepts, of the same ilk, are the masses, et al.

The truth? Within the 'ranks' are many who are more smart (in about any way that you want to measure - except for 'ego' and out-and-out amoralism) than those of the 'elite' classes that seem to want to differentiate themselves (mind you, that statement implies, in no way, any denigration of refinement, and its usefulness to help us relate peacefully).

In fact, some autodidacts (what is this? the anti-thesis of the lobbyist's ilk) may very well out-weigh the smarties in those esteemed institutions, which are supposedly the foundation of truth. But, such types of comparison can be counter-productive (except for those who want to rise above the rank-and-file -- where God is (as in, in the details)? -- thereby pulling away from any semblance of the truth -- the source of problems, in a nutshell).

If the best-and-brightest (their term) of the generation are led toward egoism and selfish grabbing, from whence will come any progress? Oh yes, they work to establish (impossible) a firm basis for gaming as the sole metaphor for us (yes, and, this take does not populist make, rather out-and-out realism -- same planet, the elite's poop is more rank (as in, odorous - due to the rarefied airs within which they dwell), et al, ..., and much more, of course).

Who is helping us look at near-zero's (engineering) characteristics and control issues (not command and control, by the way)?