HFT and other riggings

Moral: Are the markets rigged? Let's stop and re-look at high-frequency trading (list of posts that used the term).

First of all, think of the Cheshire Multiple which guarantees that early sellers get the pie (the rest get crumbs). Yet, we have based peoples' future on this. These HFT types get gains on both sides. We will explain.

However, when the HFT types pulls their gains, it has a real impact on the size of the pie and the potential crumbs. In short, think leeches and parasites rather than anything positive.

So, are they necessary for liquidity? We'll get to that, too.

Below are pointers to additional material, for now. We will get back to our arguments about silly games and fiction in regard to things financial. 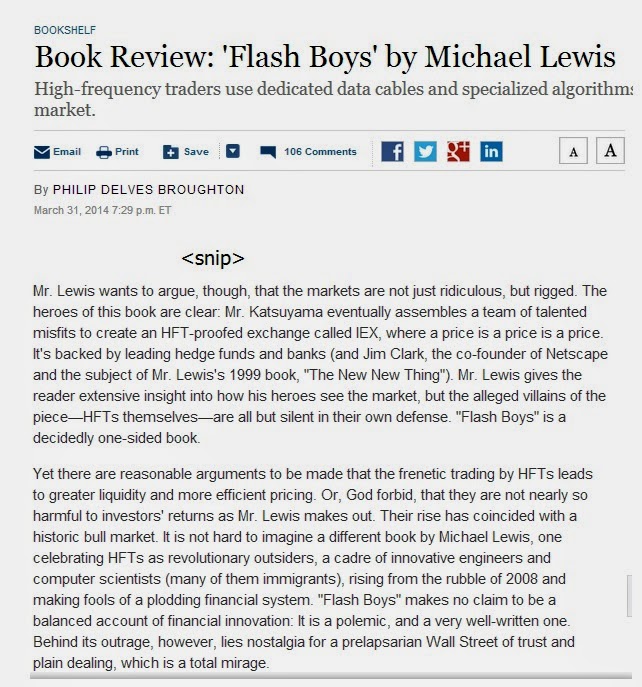 The image is from the first bullet, the book review by Philip Delves Broughton. These are the last two paragraphs. Granted Mr. Lewis loudly shouts out about a lot of stuff. However, he does have some merit in the current situation.

I have ranted about quants and HFTs since the beginning of this blog. Being an outsider, though, I'm only applying a smell test based upon years of mathematical computational experience, degrees in Economics, long years in the American economy, and a basis in grappling with foundational issues.

My early take on quants was that they were youngsters let loose by old guys with money for the sole purpose of filling pockets (taking from the hapless). That notion has not changed.

The argument for liquidity and efficiency are bogus. The near zero (search in this blog) notion is the proper argument. Those who dance with the money angels not only accumulate bad karma for the rest of us via systemic risk, they enjoy a "mirage " (yes, Mr. Broughton) of gains that are not real (upon the backs of others).

You see, to be truthful to ourselves, any high-order computational system would be redundantly viewed (yes, even those offered by the webbers), verified often, kept within reasonable bounds (and a lot more). Why? Sustainability, in short. Human dignity, for the longer view.

Let me propose to the HFT people that I, and others, could help them define these bound. The fact that these people think their type of front-running is legal indicates serious moral failings. Did we just hear that bankers want to get moral?

To be brief, as we have been at this several years now and it's nice to see something like Mr. Lewis' view crop up, HFT is a symptom of a serious disease. That computers allowed this (were the enabling factor) ought to give us pause.

PhDs? Yes, more likely, moral cretins. Actually, they do not have much grasp on how we have progressed.

You see, the natural sciences can run off a little further and faster since Nature will knock them down. Take a physicist into the realm of the dismal science and watch out. That reaction was predictable. I could smell it back in 2007 when I woke up to the fact that the financial types had taken the perdition-laden path. With finance and economics, we have harder problems. That some want to fill their pockets at the expense of others (ah yes, out-housing to exploit) needs attention.

I said it before. The markets ought to be run by a different order of people: those who do not salivate at the sight of a buck (dollar, if you must ask).


04/14/2014 -- Several quandaries lay about, for one, the "cheshire multiple" ought to give pause, especially for those looking through the fancy glass at future takings. With a crooked game, we know where the real value goes through a leeching effect. But, what of thinking of "tainted" (or did we forget the toxic assets of a short while ago?)? Yes, what are called earnings (gains) in  many cases, with the equity gaming, is really dirty money? Clean money? Oxymoron? Not really, as a sustainable economy would about with such. To be discussed.