Best and brightest of what?

Moral: Wherein we consider, just who are the best and brightest and why are they so important?

It has been awhile since I've seen an opinion, such as this one from the head of CME Group, but it does motivate a re-look at this subject. The op-ed is in the WSJ and was written by Mr. Duffy of CME.
---

Firstly, though, a recap, and disclosure. The first use of "best and brightest" was May 8, 2009. This was a reaction from hearing of big bonuses in times when things were dire. Why the bonuses? "Because, if we don't have the proper remuneration," said the Wall Street crowd, "we'll lose the best and brightest." Please note that a major theme for the blogger, in those times, dealt with the fiction in finance (truth engineering context - and, the inspiration for that concept was not Karl Marx' fictitious capital).

One main issue dealt (and still deals) with the gall of naming something financial engineering whose scientific basis has not been identified. As we come forward in time (all the while, the Wall Street, and its ilk, were being baby-glove'd by the Fed), several notions come to fore. For one, that talents differ among folks is as old as the hills leading to all sorts of problematic situations (not the least of which is the Lord/Serf dynamic, especially as demonstrated by the new phenomenon of CEO and more -- Wall Street type as serf (do you really see these as servants? - more below, due to Duffy).

For another, just because someone is facile enough to propose, and has the ability to dispose, of gnarly systems (I am prepared to discuss this at length, in depth, and to any degree necessary - both technically and philosophically - Out of control, May 7, 2010) does not give them the right to run the risks (despite the existence - perceived acceptance - of privatized gain and socialized loss). Of course, in the older days, I blamed the old fat cat who led the young, innocent best-and-brightest down the primrose path to our (and, perhaps, in some cases, their) perdition).

You see, the old fat cats could not handle the technical aspects (again, I'm a 70+ technically competent who can handle any of the discussions, at any level - at the same time, reminding all concerned of the larger issues that seem to fade out of the picture due to various things, of which the old anti-virtues (err, vice, but that relates to a squad?) loom prominent) so they get the younger set to run rampant (I've seen this many, many times while living with the results of emerging prowess - essentially, an advanced technology worldview). But, it was not just the fat cats who are at fault. Culprits abound . Some of this has been resolved; a lot has not.

---
Now, to Duffy's op-ed. Notice, how WSJ's editorial staff (image) emphasized that there has been a decline in Harvard graduates (Duffy points to an article about MBAs; what about the undergraduates?) going to finance. There was a similar reduction found with Yale's and Princeton's graduates.

But, let's remind ourselves of something. We can be more specific, as required, but there had been an earlier movement around the time of the tech boom and bust (late 1990s to early 2000s) from other fields to finance. The blogger mentioned that he had wondered why (not interested enough to really look into the matter -- Nov 23, 2008) finance could be so attractive (if done correctly, it's fairly boring, folks). Well, it turns out that the finance types were given almost carte blanche (best and brightest gone wild) to play with their models. Why? There are all sorts of factors involved here. But, the prime one is that money does talk.

We'll use Duffy's words, though, to frame the issue. He says that "institutional money" does not exist. Why? Of course, ultimately, money is traced back to individuals who have entrusted finance types to care for their little accumulation meant for "savings, retirement or education" (their's, as in, Secured payment, Nov 28, 2012, not the finance guy's/gal's, okay). Duffy says that Wall Streeters can easily forget about Main Streeters (say what? Fiduciary duty - Oct 30, 2008)). From there, Duffy goes into finance's importance.

Yes, but he says that only "a few bad actors" were the culprits behind the latest downturn. We need to remind him that banks froze because they knew that their ilk wasn't trustworthy. How can these types forget those things, so easily - it's like they took their balls home, wouldn't play the game, due to knowing that the whole things was crookedly configured?

Duffy, of course, his firm deals with these matters, talks as if creativity is essential to something that ought to be as mundane as paving a street (by the way, I've been there - it's hard work that ought to receive more compensation than it does). We can characterize this thing many different ways, but, folks, the utility aspect of finance has been put to the background (by the way, not that utilities are angels - quite the contrary). 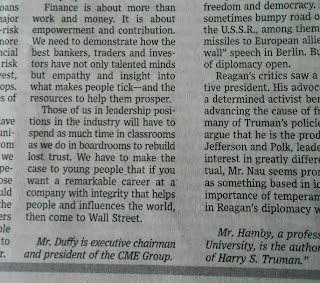 But, let's go to the sweet ending. Duffy uses integrity with respect to Wall Street's business. Imagine that! Yes, Wall Street ought to think of helping people and influencing the world. One would hope that the influence would be for the better; Duffy didn't say. But, how does one get from the supposed reality of the situation where "help" seems to be more involved with picking pockets than not? As in, from the pockets of the hapless to that of the few (Jan 15, 2010). More recently,

All in all, it was nice to see the WSJ print this. Why tie it down so that people cannot see it in order to foster the necessary discourse?

We need Wall Street'ers to wake up and smell the reality related to their ilk. But, it's like the old adage of working oneself out of a job. As it works now, the whole thing, by necessity, runs toward a continuing of the ca-pital-sino. We cannot stop (nod to William F. Buckley), but we can improve, given the proper approach. Can anyone point out improvement activity (to the benefit of the commonweal, not of particular pockets) that occurs on a regular basis?

01/08/2014 -- We're patiently waiting for Janet to get her feet wet. At some point, she'll get out of Ben's shadow. Hopefully, it will be soon for the savers who are being slapped silly by the day.

10/03/2013 -- Oh, yes, two posts (Fed-aerated and 7oops7), but no mention of savers being slapped silly. Notice in the savers post that an image says no bullets left. Ah, yes, Ben panicked and used up his ammo. But, has he not shown all of us (and the world) that there was a whole lot of other maneuvering possible? But, too, does he know that he's cowboy'ed us into a corner?