Moral: Wherein, post the fireworks, picnics, parades, and such, we consider that the real Founders set the stage for those who are usually thought to be the luminaries deserving of our attention and that those real Founders were not of the 'new king' type.

The U.S.A just had the annual celebration, on the 4th of July, of the Declaration of Independence. That is, the occasion of the signing is the focus. We hear about the Founding Fathers and see the portrait of the inking moment. We also are reminded about John Hancock.

Yet, the framework for this event started over a century earlier. We will be touching upon this as it applies to the contexts of the blog. For starters, let us just look at three of the folks who might be characterized as Founding Forefathers. The order is chronological.
This list is by no means complete and will extended. One intent will be to include Founding Foremothers, to boot, which will be the subject of the next list.

Founders, yes, but forefathers, too. Again, we are looking at three (ggps - great-grand-parents) who, in chronological order of arrival, are considered further. None of these were heavy into the Puritan ethnic mores of the heavy-handed type. The contributions of two of these were 100 years prior to the Declaration of Independence. 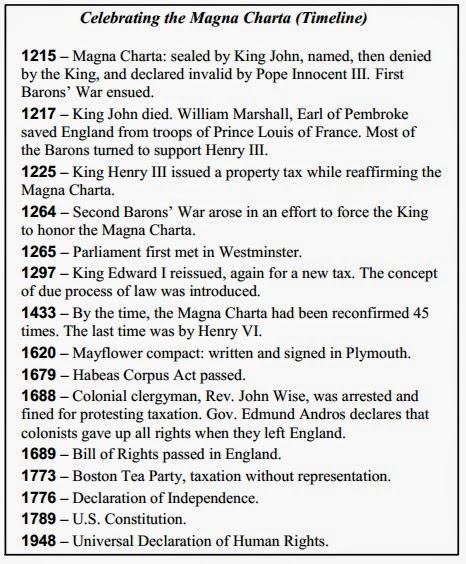 Thomas Gardner (d. 1674) - The subject of this blog, we can point to a recent Gardner Beacon issue for further information about his life. We know little of his origins, however his character is known by his children and offspring.

Stephen Bachiler (d. 1656) - Oxford graduate. Disliked the religious state that was Massachusetts. Being 70, he was not easily subdued, hence we have New Hampshire.

Rev. John Wise (d. 1725 - of Harvard) - Took on the King's representative, Gov. Andros, in regard to excessive taxation. Too, Andros had the notion that the colonists gave up their rights as English citizens when then left to come to the New World.

Now, we also need to consider how the Magna Charta concerns itself with requirements that are still unresolved in terms of the life of the average American and of humanity, in general.


01/31/2019 -- Lots has changed in these nine years. We will be summarizing them. One context: 400 or so, for one. We're building an example portal at TGSoc.org. Coverage is broad: 10th year, Content vs configuration, Culture/history/technology, and more.

08/21/2010 -- Some who came here were of royal descent (this characterization used to honour the heritage and yet to acknowledge that the traditions did not continue here). It would be interesting to see what overlap there is between those who take/accumulate and a royal heritage (that is, it's in the genes). However, there may be many who held to the ideals associated with the undertakings here and who live simply (meaning, they have no role in the current messes which are directly attributable to several malefactor's ones).